3.1. My most important hobby is music. Music in all forms: classical music in the first place, but also folk music (e.g. the original folk music of Greece and its developments into “laiki mousiki” of today), jazz and other sorts of music. 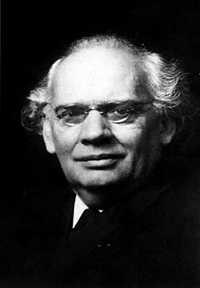 My grandfather Julius Röntgen was composer, born in Leipzig / Germany in 1855. He died in Utrecht (The Netherlands) in September 13, 1932. More information you can find in the other pages of this website and the official website: “Julius Röntgen (1855 – 1932)”. More information you can also find in the website of the Donemus Foundation, the Foundation of the Composers of Modern Dutch music: Stichting Donemus.  My father Edvard Röntgen,

(
, born in Amsterdam 12. june 1902, played the cello. {this picture made in 1969, by my nephew Jeroen Wilhelmus. Of course he tried, if I had just the same abilities to play this beautiful instrument. But I was not so talented as the other family members like my five uncles and my nephew Jurriaan. In my youth I found that to become a professional musician was not my piece of cake! Although I’m still playing the piano, I consider music as a beautiful hobby.  Orchestral and chamber Music are of great interest for me. We are often visiting the concerts of the “Residentie Orkest” / The Hague Philharmonic in the Dr. Anton Philipszaal in The Hague (Residentie Orkest) and my wife and I are dedicated members of the Series of  Chamber    Music of the  Society for Chamber Music in The Hague . World famous String quartets, like the Borodin Quartet are playing in the very old Music Hall “Diligentia”. Since three years I’m member of the board of the Concertcommittee in Oostvoorne, which is a local organisation to bring famous musicians to the little Concert Hall in Oostvoorne. For there programme see: www.concertwestvoorne.nl . I’m also a member of the board of the National Society of  ‘Foundation Friends of Dutch Music’ . This Society tries to promote music of Dutch Composers (like the members of the Andriessen family and my grandfather). My father died on september 14, 1969 during his journey to Meran in Southern Tyrol, This town is lying in the rough nature of the northern  Italian Alps. With my wife I visited this region sweveral times during my holidays from school.

3.2. Nature and Environment. Since 1973 I’m living on the Island of Voorne-Putten. Although I was not directly working on the Island as a Teacher of German Language and Literature, I stayed there. In first place: the historic city of Brielle is much more interesting than other places in the province of Zuid Holland like Zoetermeer or Spijkenisse. My interests for nature were growing since my study time in Leiden. There I discovered the beauty of the big “Polder”-areas, lying beneath the sea level. On the Island of Voorne I found both: beautiful almost untouched meadows and a beautiful old landscape with many historic farms and the Dunes, known to me from my youth in The Hague. But this region, lying next to one of the biggest harbours of the world with an enormous economic impact for our country, became steadily more inhabitants: in the last thirty years Spijkenisse was growing from 15,000 to 80,000 people and Hellevoetsluis from 8,000 to 35,000 inhabitants. A big threat for the big Nature Reservations in the Dunes of Voorne, where almost half of the threatened flora is flowering… And not only the flora is threatened but also the fauna with some bird species in the Dunes. In the eighties I became one of the founders of a Regional Society for the Conservation of Nature and Landscape on the Island of Voorne. Until December 2008 I was the Treasurer of this Society. I became member of some committees of National Societies for the Conservation of Nature: for the Dutch partner of Birdlif International “Vogelbescherming Nederland” www.vogelbescherming.nl. I’m now member in the Board of Members of this Institution and for the same Society “Wetland Watcher” for the Dunes of Voorne. In the Dutch Foundation for the Conservation of the Landscape of the Dunes “Stichting Duinbehoud” www.duinbehoud.nl  I’m one of the consultants for the dunes of the Island of Voorne.

In my times of leisure I’m counting breeding birds in a very small nature reserve on the Island and in wintertime for the Province of Zuid Holland I’m counting the water- and winter fowl. There are some websites concerning these activities: www.sovon.nl and www.waarneming.nl.

With my wife I’m also for the Dutch Society of Nature Education (IVN) a guide for interested people visiting the Dunes of Voorne.

3.3.1  History of cultures. I’m very interested in the history of my family. So I visited several times the old residence of the Röntgen Family in the “BergischesLand”, lying east of Düsseldorf. 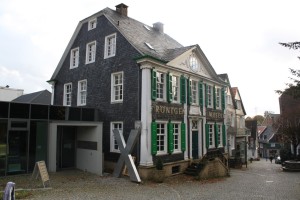 In the old city of Lennep, since 1929 part of the industrial town of Remscheid you can find the “RöntgenMuseum”, dedicated to the discoverer of X-rays, Dr. Wilhelm Conrad Röntgen. But for the history of our family of much concern too. Here you will find some pictures of the city, taken during the last three years. 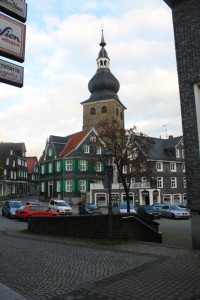 © 2009 Julius Röntgen. The centre of the small city of Lennep north-east of Cologne.

3.3.2. Something on my village Tinte www.tinte.nl . When we lived more than 19 years in the city of Brielle, we decided to choose to buy a new home in the magnificent scenery of the polder next to the village of Tinte. This village is 425 years old now. It was founded around a agrarian centre, where some agrarians coloured fabrics with a red pigment (“meekrap” (Rubia tinctorum)). 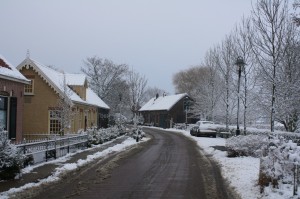 ©2009, Julius Röntgen, the Dutch village of Tinte in wintertime.

Typical for the Islands in the Dutch Delta of the provinces of Zuid Holland and Zeeland. The village stayed throughout the last 400 years a little hamlet of agrarians next to the bigger city of Brielle. Still this village belongs to the last places with agrarian activities on the Island of Voorne: Abbenbroek, Oudenhoorn and Simonshaven.

3.3.3. Brielle www.brielle.nl  is the historic and administrative centre of the Island of Voorne. 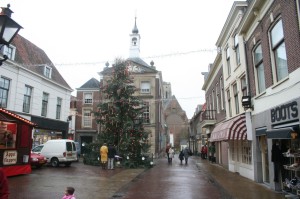 ©2008, Julius Röntgen, the city of Brielle with the old Town Hall and Market Place.  The Town Hall is now the National Museum in conmemoration of the Eighties Year War against the Spaniards (1568 – 1648). Brielle was the first town in the Netherlands to be  liberated by the troups of Prince William the First of Holland

There are also some very little fishermen towns like Geervliet and Heenvliet with medieval city rights in the direct neighbourhood. But Brielle is more important, for this town is the first city of Holland, liberated from the Spanish Emperors of the Habsburg-family. In 1572 the town was occupied by the rough people of the “Watergeuzen” for the Prince of Orange. Every year on April 1 there are memorable festivities concerning this glorious historic event.

Address author of this webpage: