May I introduce myself?

My name is Julius Röntgen, born January 6, 1945 in The Hague (Holland) in the so called “hunger winter”. 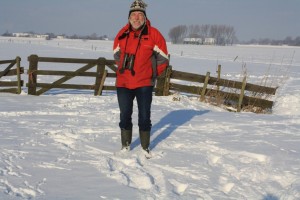 Julius Roentgen, counting birds in the ‘Polder Naters for the Dutch  Society of Bird Counters ” SOVON since 1994. picture taken during snowtime in Winter 2008. 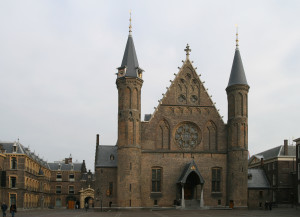 The Knight’s Hall (Ridderzaal), The Hague. the governmental capital of the Netherlands.

Our country was then occupied by the Germans. Then we lived on Conradkade 24. It was a rented apartment house. My parents couldn’t stand the landlord. But the house was very good situated: there was a magnificent view on one of the citycanals the “Verversingskanaal”. The function of this canal was to clean up the other canals and to bring the wastewater of the city almost uncleaned into the Northsea. In wintertime many migratory ducks from Northern Europe used  to be swimming there. My father was looking with his small monocular glass to e.g. Common Porchard, Tufted Duck and many other species. In the direct neighbourhood there were the vast buildings of the municipal electricity works and therefore the water never was frozen.

When I was 4 years old I walked with my mother every morning to the Kindergarten of Mrs. Van der Marck on Laan van Meerdervoort. This school was not obligatory, but as I was the only child of my parents, they wanted that I should be more socialised. Once upon a time we met a somewhat older man, walking to the stop of tramway nr. 3. He carried a simple leather bag. “Look”, my mother said, “that’s our Prime Minister Mr. Drees on his way to the Government Buildings in the city.” He lived in the direct neighbourhood of this tramway stop. I will never forget this man. Today the Prime Ministers of our country will not use the tramway for security reasons. 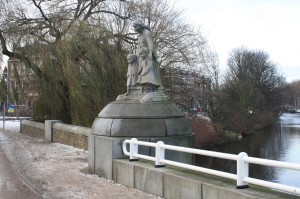 On the bridge of Laan van Meerdervoort and Conradkade there is a statue of a mother walking very carefully with her two children to bring them secure through the traffic during the rushhours. Every time when I am there again, I look to this statue, as a sort of sweet memories to a lost paradise…  as well as I wil never forget this statue as symbol of a good   mother, which my mother indeed was, looking after her both children…!!!!!         the bridge crossing the Canal of Laan van Meerdervoort: beautiful statue. In the background my boarding school. picture taken by Julius Röntgen in wintertime 2011.

As a little boy of 6 years I went to the Primary School “M.M. Boldinghschool” in the Hollanderstraat in the Duinoord Quarter. My parents decided to bring me not to a public elementary school. 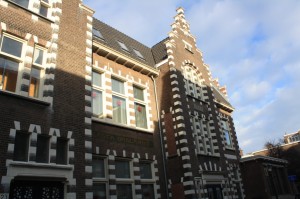 It was a very nice school with good teachers. There was a real director, Mr. Willering, who stood every morning in the door of his office, looking very severe if everything and every pupil was passing by in good order. In springtime the pupils of the school used to play a little sketch on the stage in the Gym. Everytime you walked in rows of two pupils, going to the swimming pool “De Regentes” in Weimarstraat. The building itself exists still, but there is nowadays another Primary School in it.

Twelf years old I made my “admission exams” for the Municipal Grammar School “Gymnasium Haganum”, still a very well known educational institute in first place preparing for higher studies at the Universities of our country. 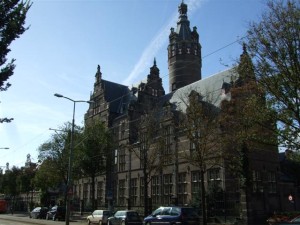 The building itself was a species of architectural style, built in Neoclassical style in the first decade of the Twentieth Century. With teachers, who are mostly academicals, the “spes patriae” was attending classes in Latin, Greek, the three modern languages, English, French and German and of course our mother language Dutch, History, Mathematics and later Biology, Physics and Chemistry. But one used to study History of Art and sometimes Music too. Some years ago there was a reunion.

After my education at the “Gymnasium Haganum” I went in the Dutch Army for my Military Service, for 18 months. I finished this job as a telexist in the Communications service.

In the last three months of my Military Service I could start my study of German Letters and Literature at the State University of Leiden. During my study time I was a member of a student club of agnostic students “Socrates”. There I met the later famous Dutch novelist Maarten ’t Hart and several other well-known people. I met the big love of my life Yvonne Jungslager, still my wife. On the first of June 1973 my studies came to an end with a doctorate study “Aesthetics of Music in the Frühromantik”, a study of ten years of German Literature (1796 – 1805).  As a second subject I have chosen Musical History. Due to my heritage as a member of a family of well known German, Dutch and American musicians I made this subject.

My father played for 43 years the Violoncello in the het Residentie-Orkest  (The Hague Philharmonic)   From him I was inheriting my love for the classical music. In the season of Easter he made his yearly studies of playing pasts vor Viola da Gamba of the Oratories of St. John and St. Matthew of Johann Sebastian Bach. For me that music I will never forget, it’s my relation to religion. 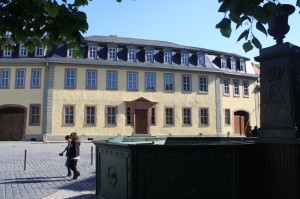 Goethe’s home in Weimar. The poet lived in the second floor of this big house  at the square called “Frauenplan” in Weimar until his death in 1832. Picture of ©1973 by Julius Röntgen

now freely to this part of Germany!

After my study time in Leiden I started my professional career as a teacher of German Language and Literature. First in the neighbourhood of Leiden but since 1973 in Rotterdam and vicinity. In the last part of my career I was teacher of German  Language and Literature in the Adult Education and also as a teacher of Dutch Language for Immigrants. In the first ten years of my professional career we had many elder people taking their second chance to get a official certificate, to start e.g. studies at the University or to become higher qualifications. I made several journeys with these people to the German Democratic Republic now a part of the GermanFederalRepublic. It was not so easy to travel this country… you had to apply months in advance to become an official visa for this “socialist” country. But the city of the most famous German authors Goethe and Schiller, Weimar in Thuringia, was worth going. Mostly we have ended the trip in East and West Berlin. A bigger contrast you can’t imagine! (See also my pages: 20 Years of German Freedom). 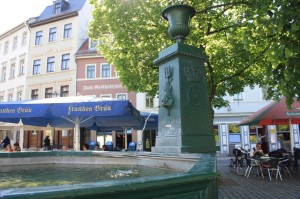 The little square “Am Goethebrunnen” with the fountain. On the column with the crane you can read the shortening “CA” te lezen. This Monogram” CA  stood for Carl August the Duke of Saxony, Weimar and Eisenach, where Goethe lived as a mighty Official involved as a Secretaey of State. Picture© 2008: Julius Röntgen

It’s a good thing to know, that you can now freely to this part of Germany!
travel
This the end of this introduction. Review of this page: December 31, 2009. UpdatedFebruary 28 2015. 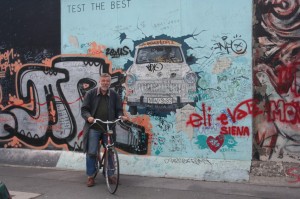 Julius Roentgen, writer of this website in front of the East Gallery, Berlin 2007. This part of the Berlin Wall (see also my special page 11, dedicated to th Fall of Berlin Wall on November 9, 1989). this picture taken in October 2007 by Fred Winsser, with whom I made a special trip to Berlin.
This part of Berlin in former day Eastern Berlin, was not accessible from the West or West-Berlin. Only troops of the Allied Forces had special passes to cross the Zone borders.