This website is a remodelling of my first site published in 1997 and continued on my new website under juliusrontgen.info in 2009.

The picture above: on the right: ©2011, Joost Galema, Hilversum.

All pictures and texts: ©2015, Julius Röntgen 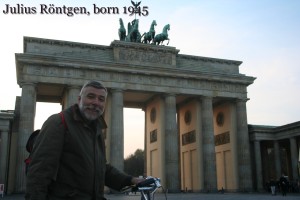 Berlin. Julius with his bicycle in front of the Brandenburg Gate, view from The Eastern side of Berlin.