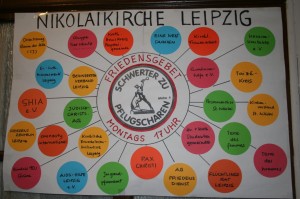 Nicolaikirche Leipzig_Montagsabendgebete_1989. Mondayevening pryars 1989.At the ninth of November 1989 there came an end without bloodshed to the inhumane regime of the Communists in the eastern part of Germany. In the middle of this picture, you can see the Logo of theforbidden  peace – movement in the GDR: Schwerrter zu Pflugscharen” ” ” Swords to Ploughs”. Thanks to the engagement of this Movement. Germany is now a proud democratic member of the European Union.

Church of St. Nicolai in Leipzig. Base of thepryaries on Monday evenings in the Eighties. September 3 2007.

On August 13 1963. the Government of the part of Germany controlled by the Soviet Russians started to build a big wall in Berlin, which was dividing the Eastern Part of the city, in that time under control of the Soviet Army  from the western parts which were under control of the British Army:  Kurfuerstendamm and vicinity, under control of the  French Army: Tegel and the Southern part of Berlin controlled by the US Army. Each part had his own airport for Military and commercial planes. But only commercial planes of allied companies could land on these  airports. this wall was build to avoid that a steady growing number of people who saw no future anymore for their children in the city was leaving East Berlin. In Germany itself there was repeated this dividing in three parts. there was from 1963until the 3rd of October 1990 a  highly controlled border , where no one could cross. there were some people trying this to do and many of them lost their lives with it. there were some spectacular escapes too, with tunnels in the city of Berlin, with Balloons in the centre of Germany and with boats in the Nothern Part. the free, traffic to and from Berlin West was regulated by several older Agreements and Treaties. the Government of the Federal Republic of Gemany was subsidizing this free travel to and fro by paying the Costs of the transfer Visa for everyone travelling from the West German Border in Helmstedt Marieborn Motorway = (Checkpoint “A” to the border of Berlin (West) in Dreilinden Checkpoint “B”).

After the Fall of Berlin Wall on November 9 1989 there was a short period of somewhat more democracy in the GDR. there were some new Parties  as Buendnis ´90 and the old Communist Party, now called `Die Linke` and the old allies tried to make with political international conferences a solution for this old problem. in these conferences, where the two States in Germany were confronted with the old Allies a big rol played the wellknown Russian politician Gorbatshov. These conferences lead to a New Treaty  of Peace on September 12, 1990, which lead to a new German State: the Federal Republic of Germany. in fact September 12 1990 means the end of the Second World War. On October 3 1990. was the start of the new Situation of a free and sovereign Germany. and still is October 3 the Grand  National Memorial Day in Germany. After This, the Soviets withdraw their troops from Eastern Germany and the rebuilding of the Eastern Part could start. Also in the years to follow until now I´m visiting the Eastern Part of Germany regularly.

On November 9 1989, exactly fifty years after the “barbarian “Kristallnacht”, during which many Jewish families suffered for the prosecution of the Nazis.. there was a totally unexpected change. in History. After a long period of weeekly demonstrations in Lutherian Churches in Leipzig and East Berlin, the Berlin Wall opened. Almost nobody could believe this, but in the evening og the ninth November 1989, the People of East Berlin could freely passthe Wall. In Berlin it was the Luthe ran Gethsemane Church, in which every Monday there was a pryar for Peace. The same happened in the beautiful Church of Nicolai in Leipzig, where I had been before in 1986, with my wife and my mother. This page reviewed on May 5, 2015. But this church played  also a role in the life of my grandfather Julius Roentgen. On Palmsunday 1881 he played the Organ with his fiancee Amanda Mayer as a violonist in his composition for organ and violon 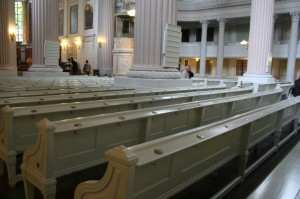 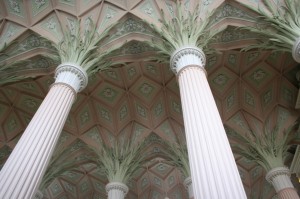